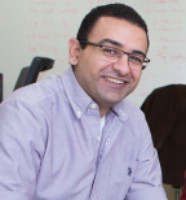 Prof. George Shaker is an adjunct associate professor at the Department of Mechanical and Mechatronics Engineering as well as the Department of Electrical and Computer Engineering at University of Waterloo. He also oversees wireless activities in the sensors and devices lab at the UW-Schlegel Research Institute for Aging. Previously, he was with Research in Motion (BlackBerry). He was also with Georgia Institute of Technology. He has been the Principal Scientist and Head of Research at Spark Technology Labs (STL), since its founding in 2011. In 2017, George was selected by the office of the president of NSERC among a group of ten Canadian professors to discuss Canadian research advancement in the Internet of Things (IoT) area at the special NSERC-NRC-MOST meeting in Ottawa. In addition, prof. Shaker serves on the organizational committee of the French-Canadian Bioengineering School.